Creating a safe and compliant workplace for shift workers

A major deal was blocked by customer concerns around compliance. Our design team developed a set of features to address those concerns and move the deal forward. 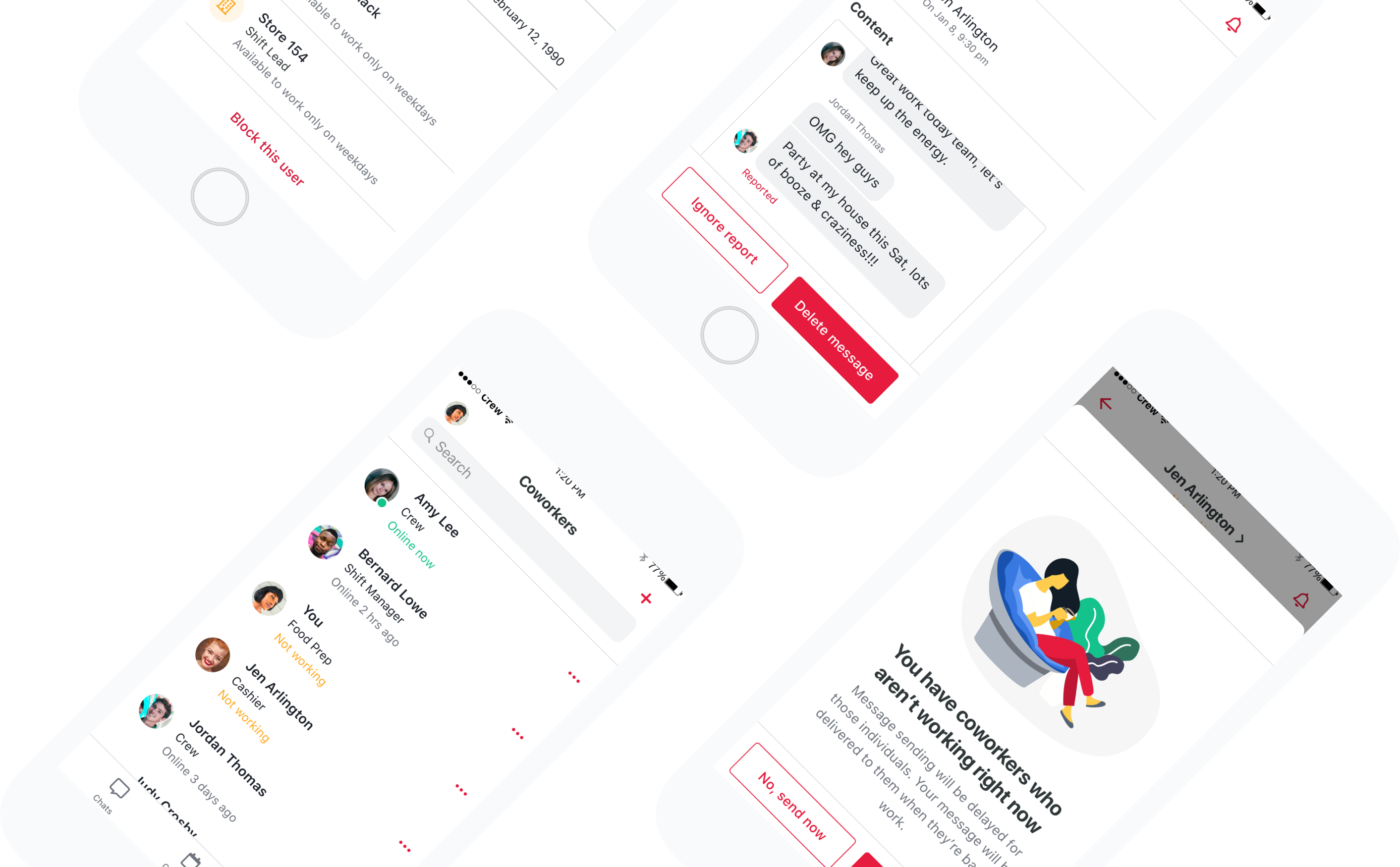 A compliance vision was integral for closing enterprise deals

In November 2018, we were close to signing a pilot with a major brand. It would be our biggest deal yet — but we were blocked by customer concerns around compliance.
‍
This was new territory for us. Until recently, we had focused on smaller customers for whom compliance wasn’t an issue. Given the urgency of the situation, our CEO asked the design team to participate in an emergency design sprint.
‍
Over a few (long) days, we translated the customer’s concerns into concrete user scenarios. From those user scenarios, we developed a vision for Crew's compliance product. Below are highlights from our vision.

Tina, a manager, tries to drive team performance by sending tips and words of encouragement on Crew. But team members feel pressured to read and respond to her messages, even when they’re not working a shift. Can Crew help create a better work-life boundary for team members?

Crew uses a combination of location and scheduling data to determine when employees are working — and when they’re not: 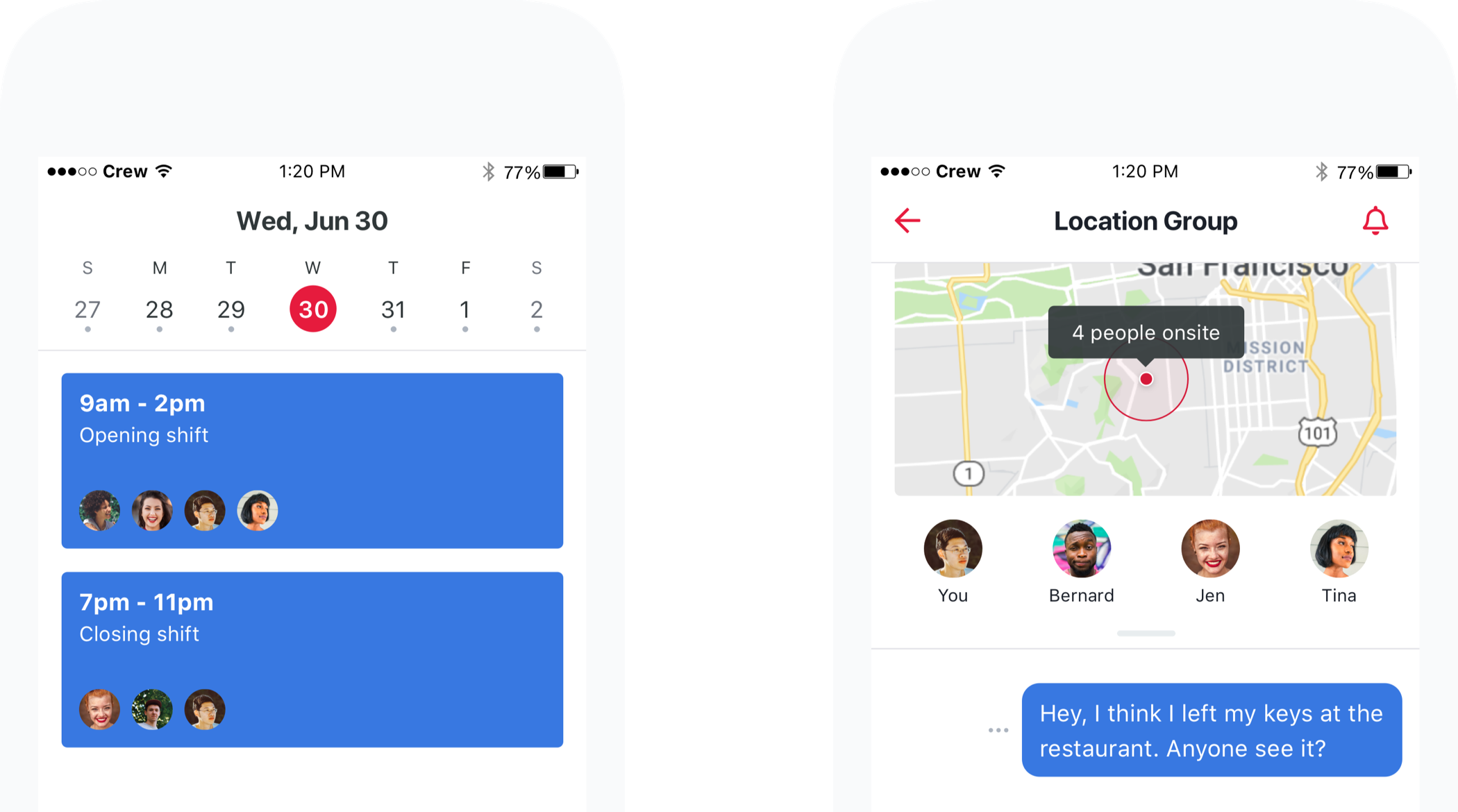 Employees who aren’t working are tagged in the app, helping coworkers take caution before messaging them:

Employees have the option to schedule their messages so that recipients receive it only when they're working: 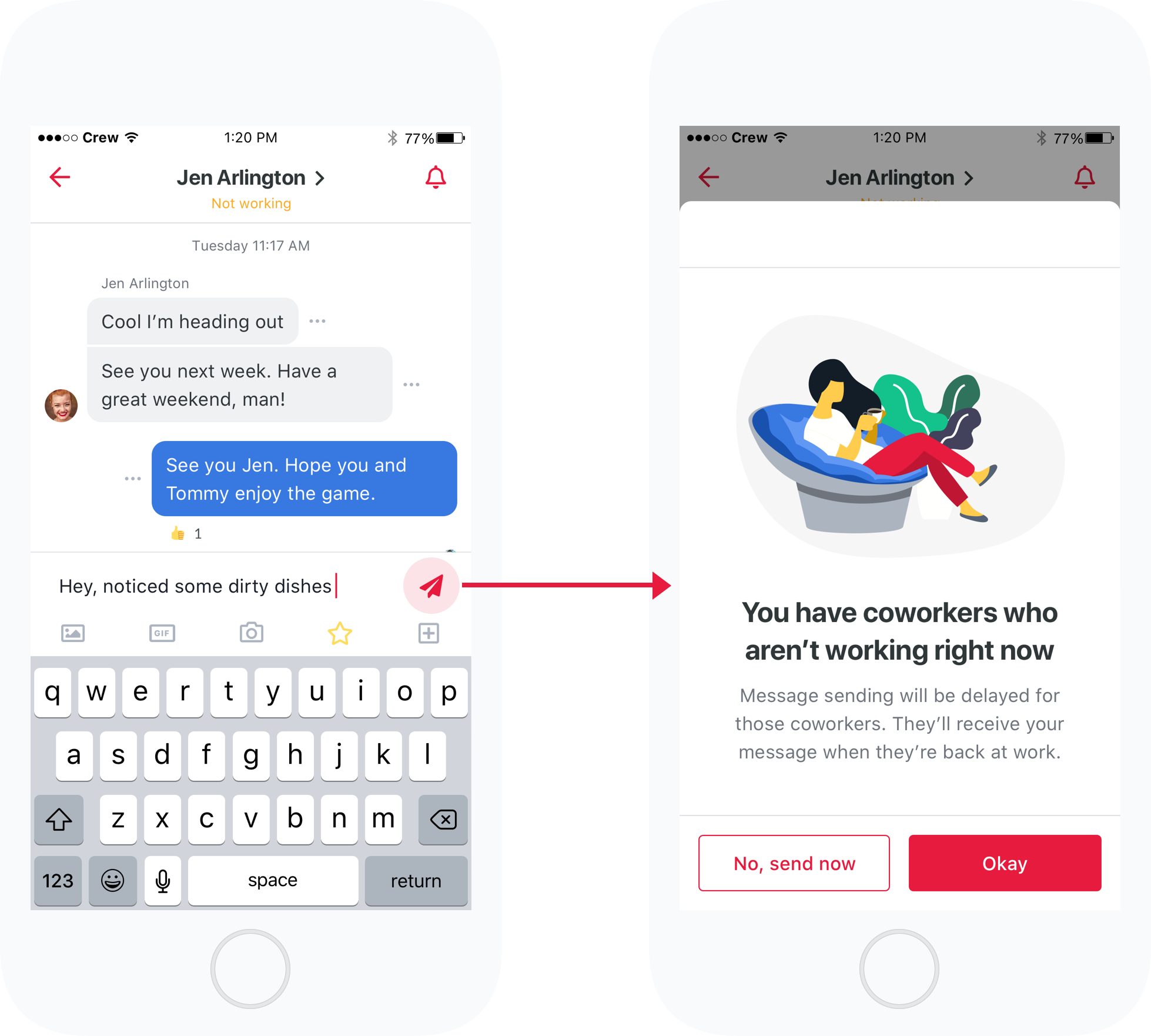 Jordan, a new employee, sends an inappropriate message on Crew. Managers don’t see the message because they're busy with other things. How can Crew make it easier for managers to become aware of inappropriate content?

Employees are empowered to report inappropriate content when they see it: 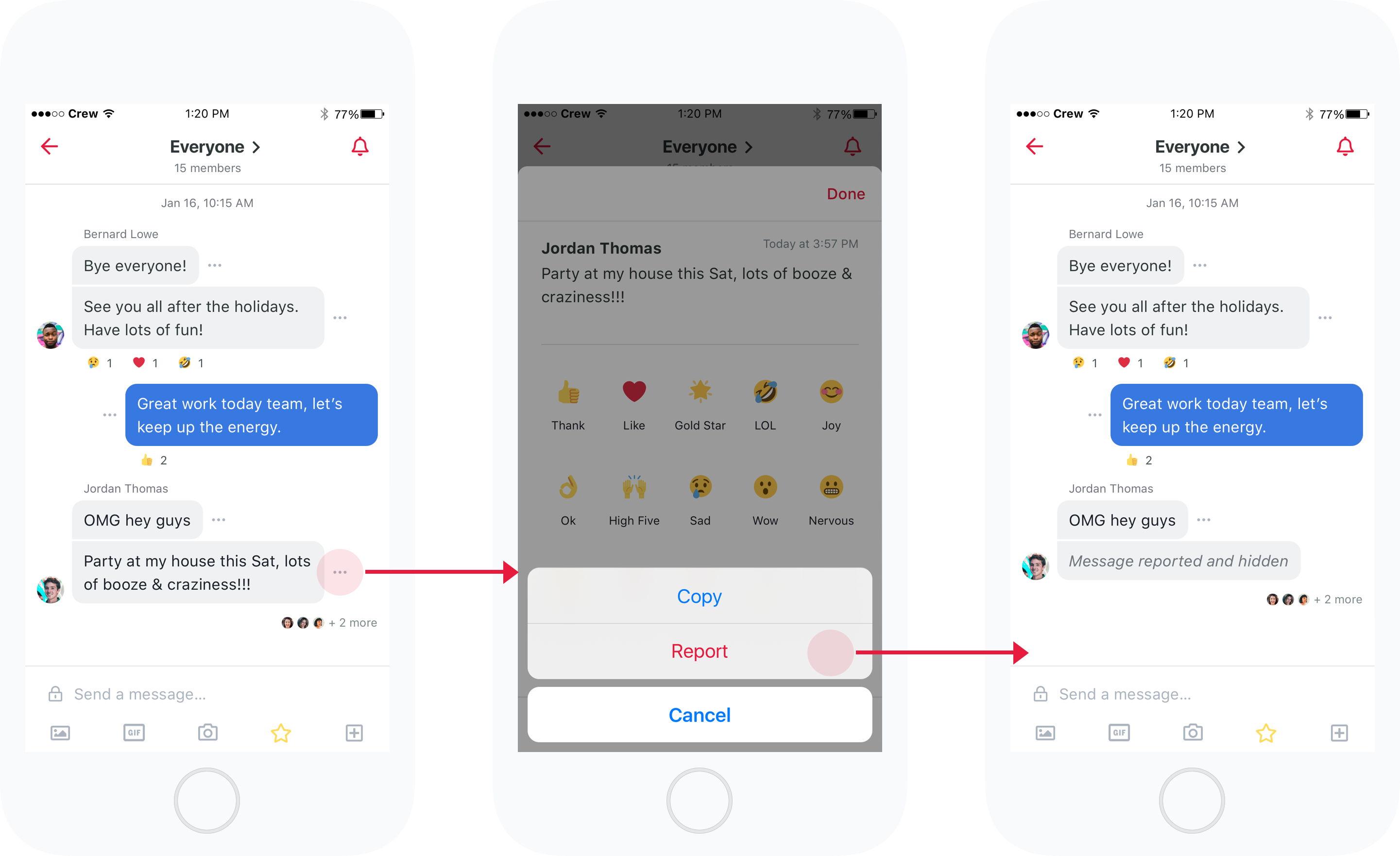 Managers are notified when content is reported and can see what happened:

Jordan is angry with his team. He decides to send a series of angry messages to everyone on Crew, blowing up his coworkers’ phones with endless notifications. What can his teammates do to stop harassment from Jordan?

If Jordan’s behavior is affecting the entire team, managers can suspend him: 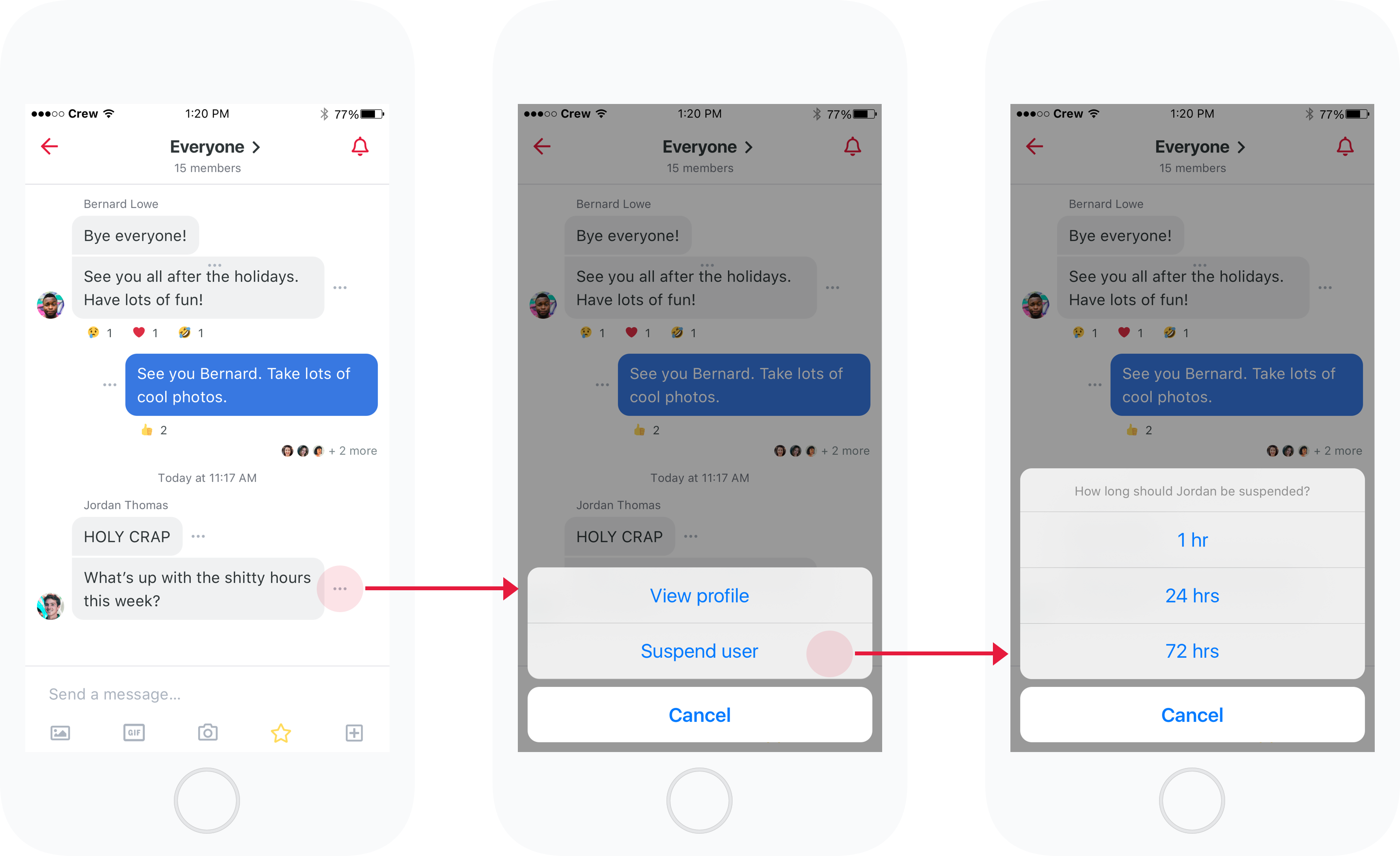 During suspension, Jordan can still use Crew to check his schedule and pick up shifts – but is prevented from sending additional messages:

If Jordan harasses a coworker in a private conversation, his coworker can block him, which means she no longer sees direct messages from him: 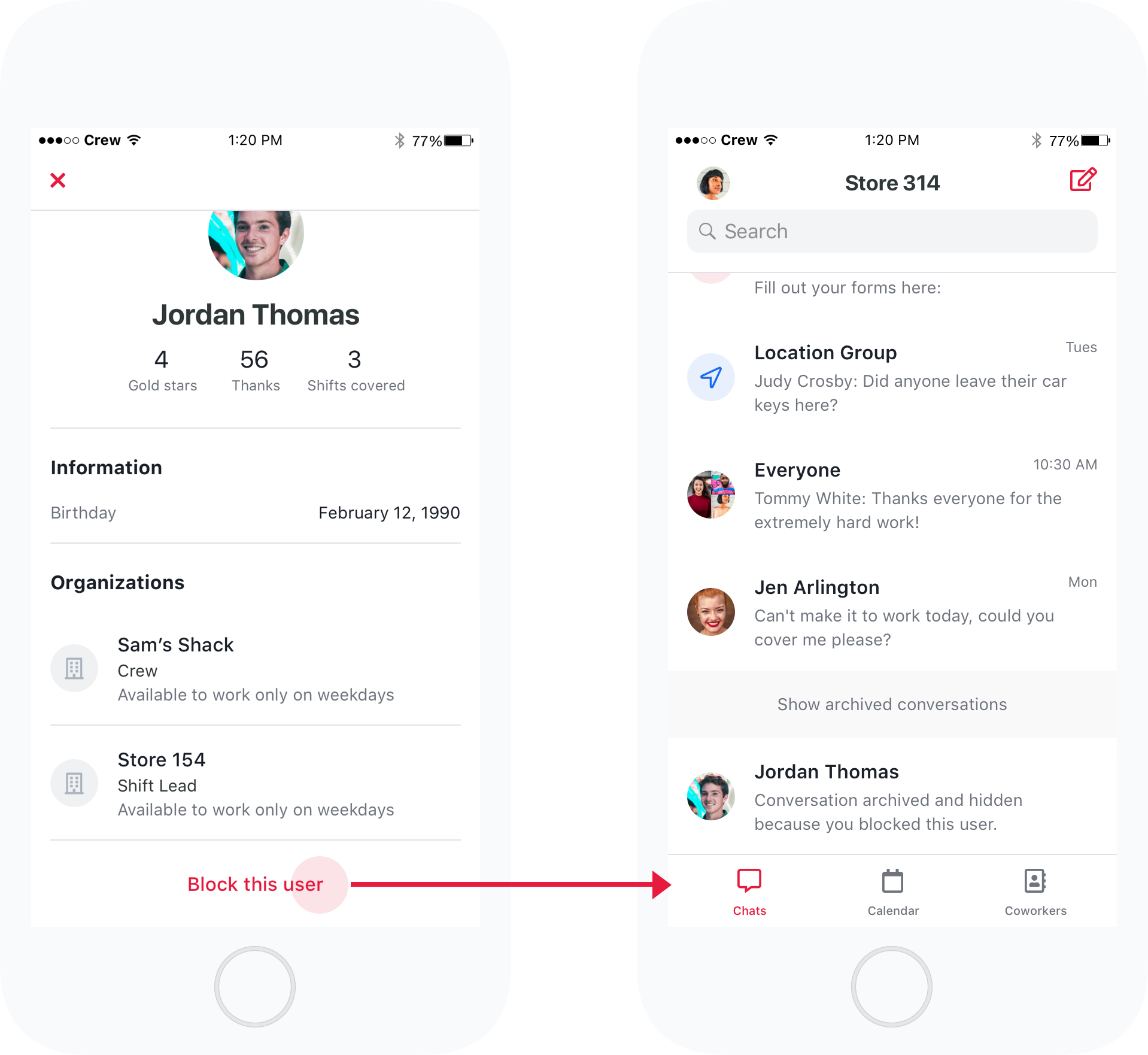 Crew’s compliance vision convinced the major brand to move forward with a pilot, which converted into a signed deal early this year. Unsurprisingly, compliance has come up in conversations with other customers – but now, our sales team is prepared. They regularly leverage our compliance vision to show how Crew is designed specifically for shift workers.
‍
Building out the features from our vision is now a top company priority. I’m currently the lead designer for our compliance features, working to translate our sprint ideas into full-fledged designs that can be implemented by our engineers.