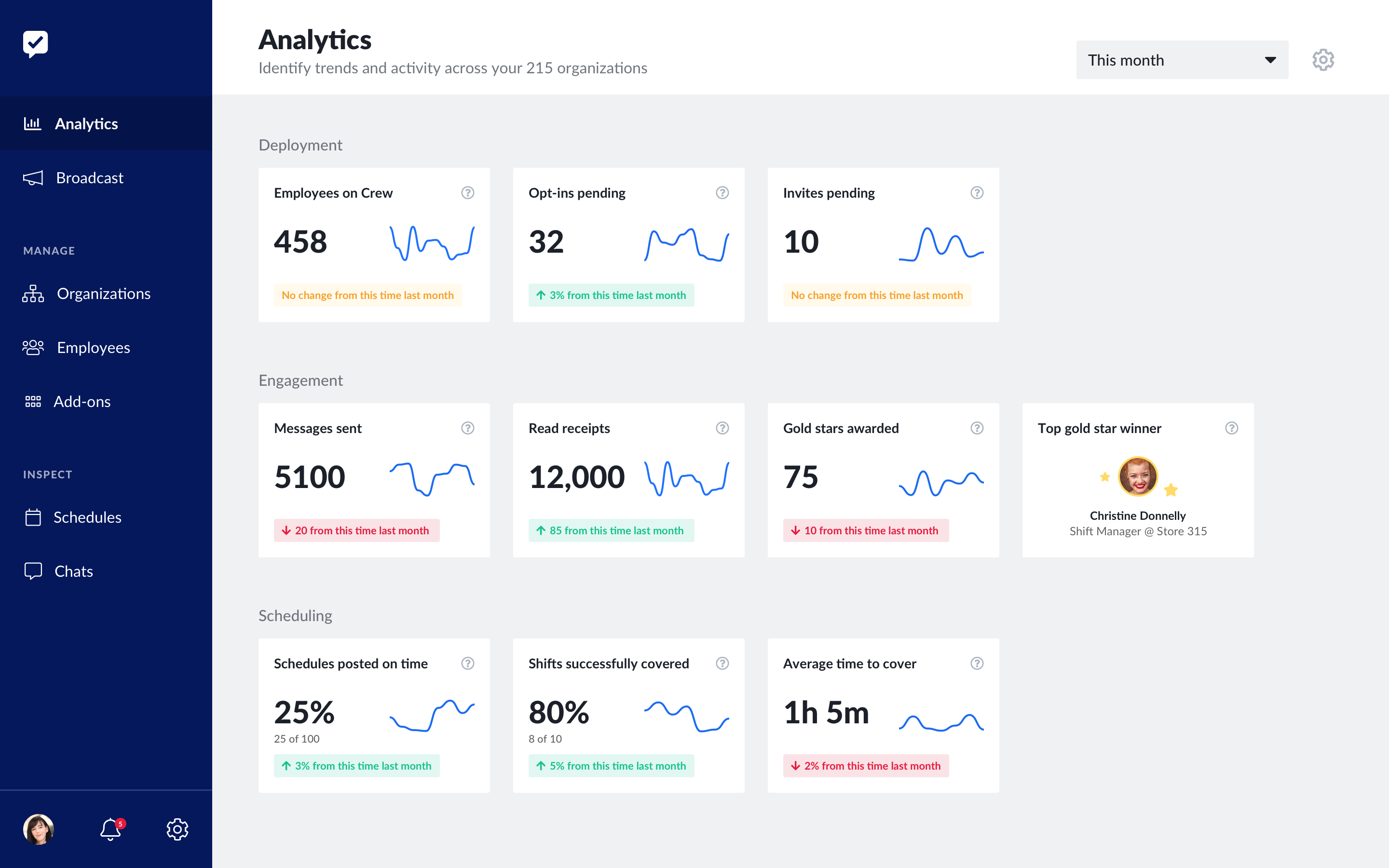 Crew is a messaging app that helps shift workers communicate, view their schedules, and swap shifts. Crew's biggest customers have hundreds of teams on the app. Their leaders rely on Command Center, Crew's enterprise product, to see how employees are using Crew and manage them from one place.

Command Center had an existing analytics dashboard, built before there were any real enterprise customers. Years later, in 2018, customers complained that the dashboard was severely lacking. 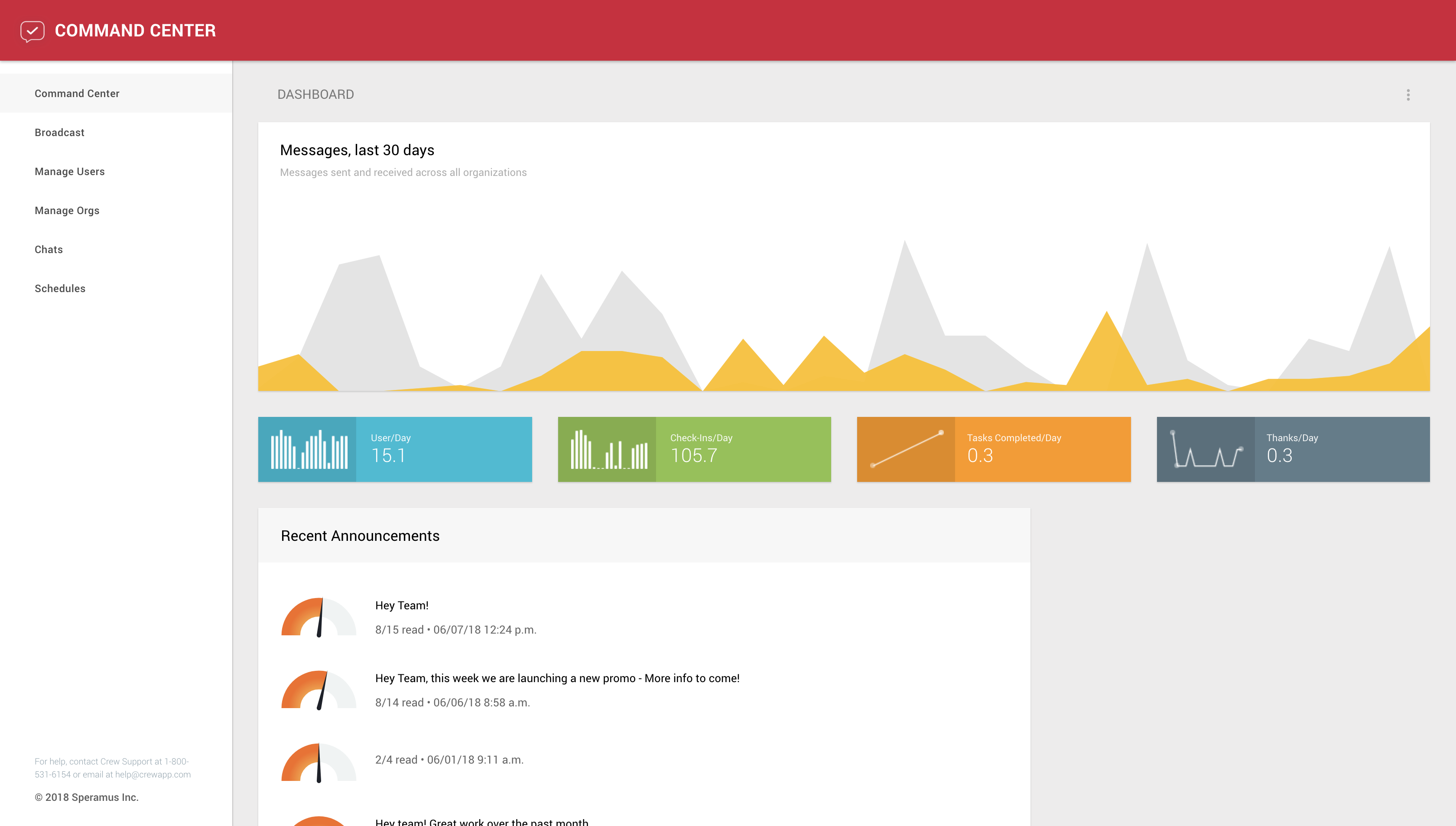 Command Center's dashboard before the redesign

What was wrong with the dashboard? The feedback from our customers and sales team was consistent:
‍
It didn’t provide useful metrics
There were no metrics around Crew’s add-ons, which provide customers with valuable workflows on top of messaging. Instead, the dashboard was a hodgepodge of numbers, many with no discernible business value.

‍It didn’t help customers detect patterns or drill into details
Data was aggregated for all teams, restricted to the last 30 days. It wasn't possible to specify a different time frame or look at data for specific teams.

‍It was poorly organized and hard to use
‍Metric names were unclear, axes weren’t labeled, and interactions were hidden. Nobody ever guessed, for instance, that hovering over the peaks of the "Messages sent" graph would bring up values for specific days.

My CEO acted as the product manager for this project. We agreed that the redesigned dashboard should have the following qualities:

The redesigned dashboard should allow companies to surface the data relevant to them, including any configuration of add-ons used by their teams.

The redesigned dashboard should be flexible, able to easily accommodate new data inputs.

Finally, we agreed that the new dashboard should see just as much usage (if not more usage) than its predecessor.

To kick things off, I brought in key internal stakeholders – our CEO, Director of Revenue, and account managers – for a brainstorming session. If we had unlimited time and resources, how would we redesign Command Center's dashboard? Our brainstorming produced ambitious features around team mapping, real-time notifications, and interactive graphs. 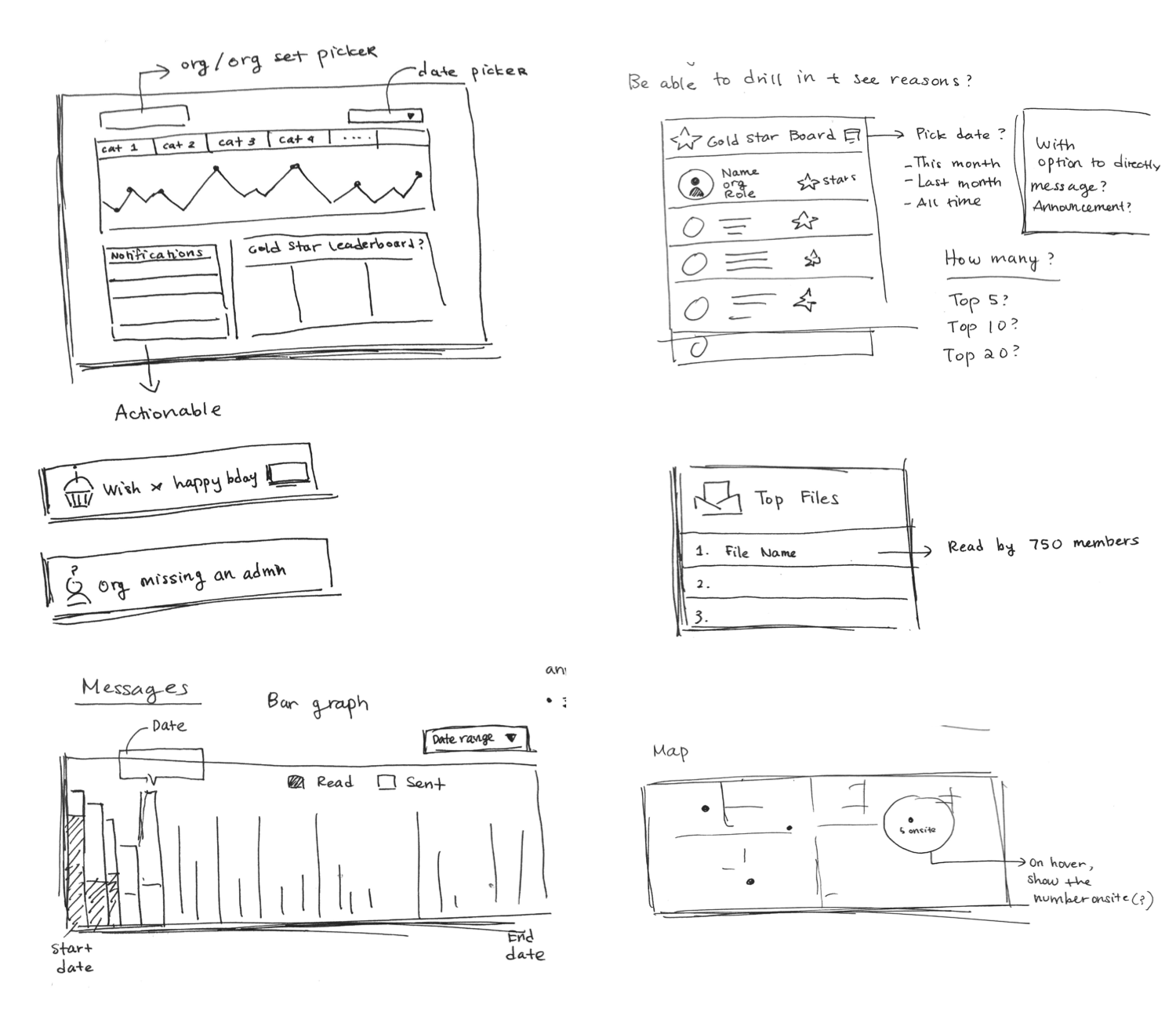 Most of these ideas weren't feasible given our timeline, but it was still helpful to envision what a "blue sky" redesign would look like.

With constraints in mind, I decided to focus instead on identifying the right data to surface in the dashboard. I interviewed five of our most engaged enterprise customers to understand Crew's role in their businesses. Here are some of the things they told me:

“When I think about my teams, I want to know if schedules were posted on time and how many shifts are covered each week.”
“The number of gold stars given on each team through Crew helps me measure team morale.”
“If I see that people haven't accepted their invitations to join Crew, then I know why my announcements aren't being read.”

I realized that some metrics – around messaging and scheduling – are important to all customers; but customers also use Crew in idiosyncratic ways. Some customers use the Task add-on, others depend heavily on the Time-off add-on.

In following explorations, the question I asked myself was: can we design a framework that lets customers slice and dice Crew's rich data however they want?

I worked with two engineers (one backend, one web) to implement the redesign. The solution we released had the following features:

‍‍‍Deployment metrics
‍Metrics in this category help company leaders track Crew's deployment across their teams. Previously, this data was manually pulled for customers; surfacing them in Command Center alleviated a pain point for both customers and account managers.

‍Scheduling metrics
‍Metrics in this category are surfaced from Crew's scheduling add-ons, allowing company leaders to gauge when schedules are posted and whether shifts are being covered. These are critical metrics: employees need access to their schedules to know when to work, and uncovered shifts cause decreased productivity.

‍Card framework
Metrics are displayed in cards on the dashboard. I tried to develop a generalized card design. The result was two types of cards, one for numeric metrics and another for ranked metrics:

‍Time buckets
Users can select different time ranges by which to view the dashboard data: 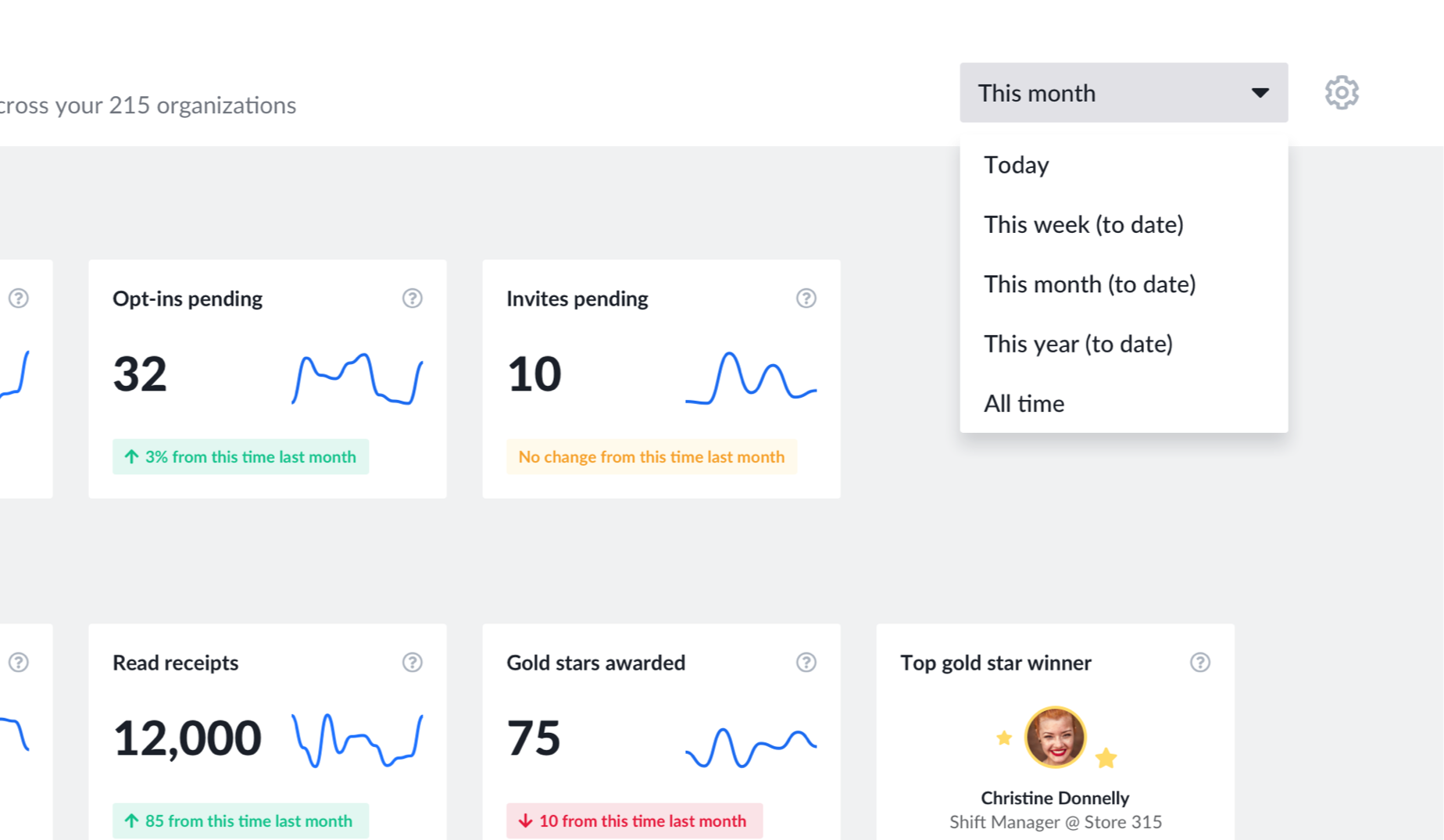 ‍Team drill-down
‍Clicking on any metric card brings up a distribution of the metric across teams, allowing company leaders to pinpoint high and low-performing teams:

A successful release allowed us to start planning future improvements

The redesigned Command Center dashboard was released in early 2019, and so far, feedback has been largely positive:

We've also received some critical feedback, which will help the team improve the dashboard in its next iteration:

“Can I set flexible start and end dates? I want to see how often schedules are posted on time each quarter.”
– Enterprise customer

Internally, we've also had some ideas for improvement. One idea is providing more robust visualization for the metrics that customers engage with most. We're currently tracking how often each metric is clicked to make this determination.

Finally, we have a team at Crew working on automatic labeling of messages by topic (e.g. scheduling, recognition, etc). This data could eventually be surfaced in Command Center to provide additional insight into frontline communication. 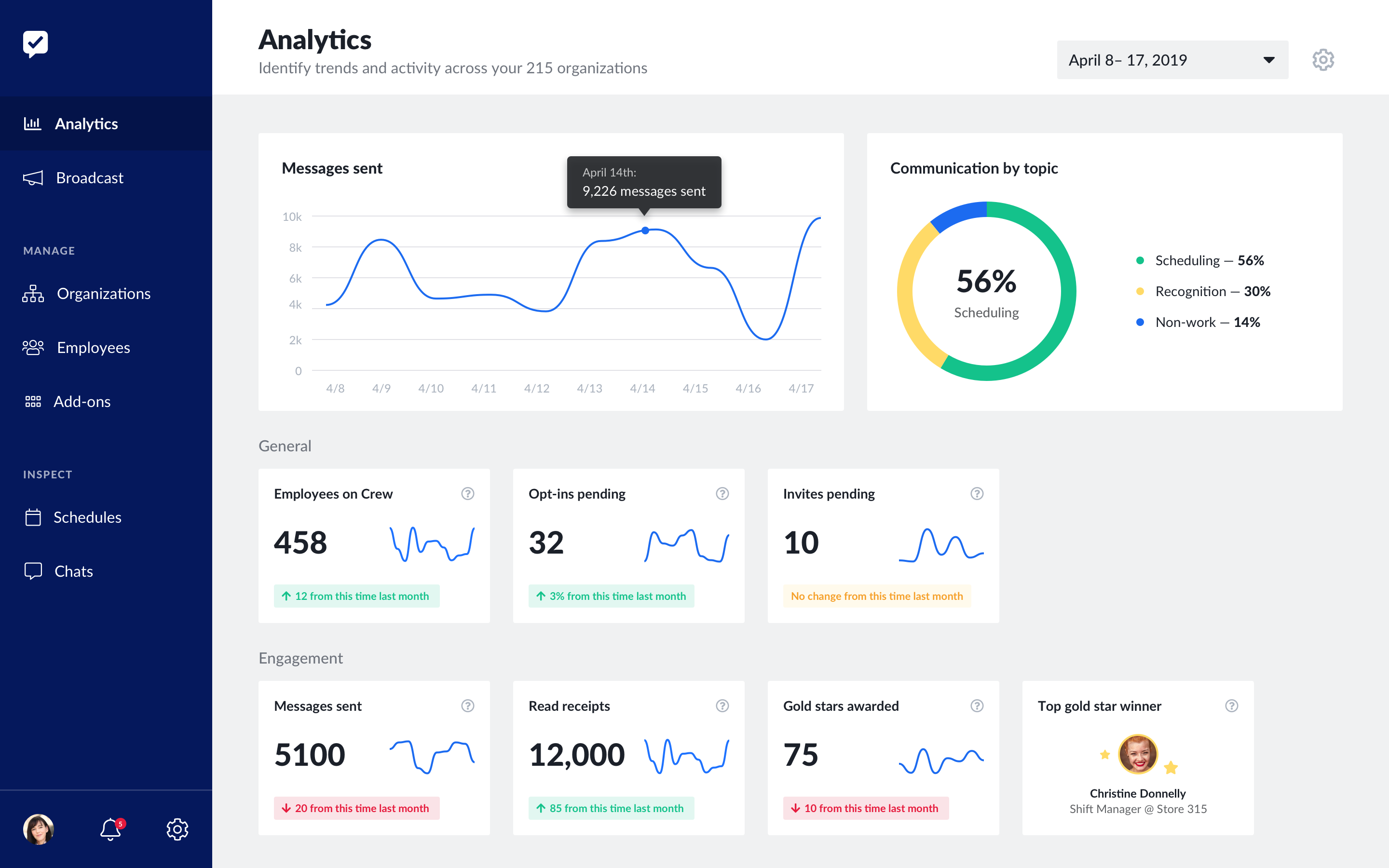 Explorations of an updated dashboard that addresses team and customer feedback

Working on Command Center's analytics dashboard was a great way to learn about our enterprise customers. I look forward to seeing the dashboard's next evolution.